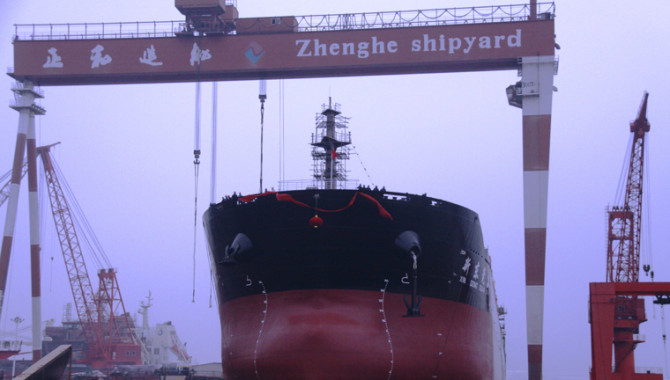 After the bankruptcy auction, Zhenghe Shipyard, which was once a “star” shipbuilding enterprise in Zhejiang Province, will completely withdraw from the shipbuilding industry and transform into the field of environmental protection building materials.

Zhenghe Shipyard is planning to build the largest port-based mixed mechanism sand processing and manufacturing base in the Yangtze River Delta region.

In the future, Hehai Building Group will make effective use of the original docks, shorelines, sea area use rights, ship berths, workshops and office buildings to rebuild the sand processing and production project with an annual output of 20 million tons of mixed mechanism.

With a total investment of 600 million yuan, Zhenghe Shipyard will build a 50,000-ton bulk cargo terminal, and apply for the adjustment of the approach channel to 50,000-ton.

Zhenghe Shipyard, which is headquartered in Zhoushan, was established in 2004 and was put into production in 2007. It was once a “star” shipping company in Zhejiang Province.
In 2014, Zhenghe was listed in the first official "white list" of China's shipbuilding industry. However, affected by the continuous downturn in the domestic shipbuilding industry, Zhenghe Shipyard's main business profits are difficult to support financial costs, and finally it is in trouble due to the broken capital chain.