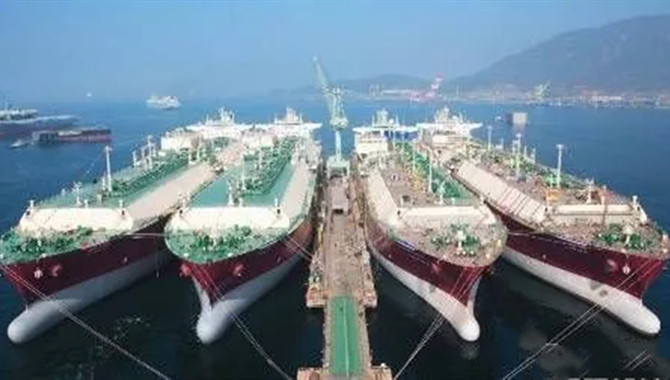 Qatar's first batch of 80 LNG carriers with a total value of up to US $15 billion is under way. As the only Chinese shipyard capable of building large LNG carriers, Hudong Zhonghua will compete with three giants of South Korea and is expected to win some orders from South Korean shipyards.
According to foreign media sources, Hudong Zhonghua, Hyundai Heavy Industries, Daewoo Shipbuilding, and Samsung Heavy Industries have recently submitted to Qatargas a revised quotation for the construction of 80 LNG carriers. Kawasaki Heavy Industries, which had originally intended to participate in the competition, has withdrawn from participating in this process.
It is reported that at least 32 shipowners have expressed interest in participating in this LNG construction project, and it is expected that the time charter contract with the shipowner will be reached before the end of this year.
Qatargas is eager to cooperate with China State Shipbuilding Corporation and Hudong Zhonghua to launch the most competitive LNG carrier in the world.
The chance for Chinese shipping companies to win orders for Qatar LNG ships will depend on the delivery schedule of Korean shipping companies and the delivery arrangements of shipowners. In addition, the participation of Chinese shipowners or charterers is also important.
Sources familiar with Qatar's LNG transportation business said China had put "great pressure" on Qatar to order LNG ships in China in exchange for China's purchase of Qatar's LNG cargo volume.
Source:Sarah Yu,XINDE MARINE NEWS