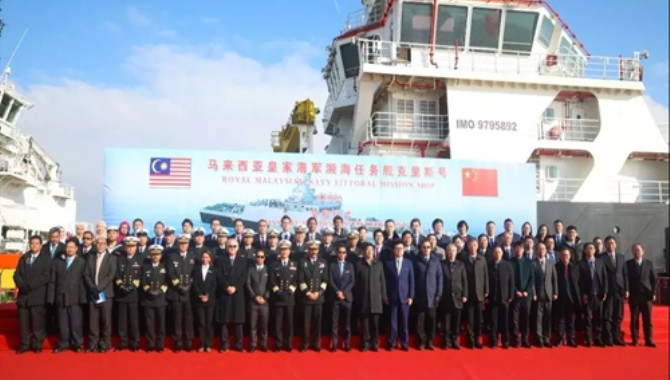 China's shipbuilding giant has delivered the first of four littoral mission ships (LMS) to the Royal Malaysian Navy, marking the high-level military cooperation between China and Malaysia, analysts said on Wednesday.
The Wuchang Shipbuilding Industry Group, under the China State Shipbuilding Corporation, delivered the ship, named Keris, to the Royal Malaysian Navy on Tuesday at a base in Qidong, East China's Jiangsu Province, according to a statement by the Wuchang Shipbuilding Industry Group on its official WeChat account.
Wu Xiaoguang, deputy general manager of China State Shipbuilding Corporation said at the ceremony that the LMS project is the first large scale military equipment cooperation project between China and Malaysia.
The delivery of the ship highlighted a new phase in the cooperation between the company and the Royal Malaysian Navy, Wu said, noting that he hopes both sides will continue to expand their cooperation.
According to the contract, China will build three more of these ships for the Royal Malaysian Navy, the Xinhua News Agency reported in 2018.
Construction of the first ship began on July 31, 2018, and the second ship has been under construction since October 23, 2018, according to Xinhua.
These vessels reportedly are 69 meters long with a displacement of more than 700 tons and a top speed of 22 knots. They can be armed with guns and used for patrols, anti-terrorism activities, rescue missions and protection of fisheries, reports said.
If Malaysia is satisfied with the Chinese-built ship, it could place additional orders for LMS or other types of warships that suit its needs, and China's shipbuilding industry will be fully capable of meeting that demand, a military expert who asked not to be named, told the Global Times on Wednesday.
China can also provide ground and air equipment, like the JF-17 fighter jet, the expert added.
Source:Global Times