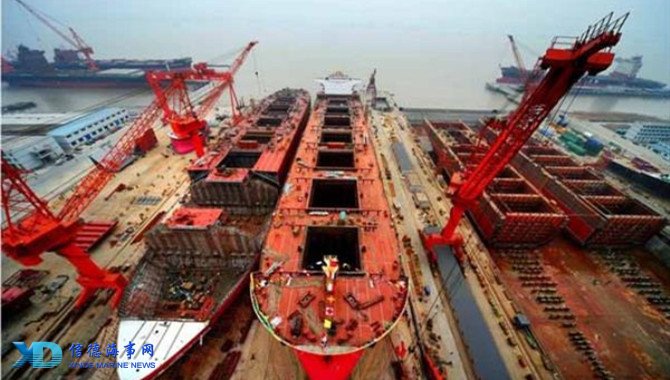 From refitting and import, to manufacturing and export, China's shipbuilding capacity has surged over the past few decades. The industry is rapidly closing the gap with other powers, providing the solid foundation for the navy's leapfrog development.
Shanghai Zhenhua, one of the world's leading port machinery companies, is an example of success.
Li Ruixiang, a chief economic manager of the company, said the cutting edge strength relies on technological breakthroughs, proprietary research, and production in marine engineering.
"We are taking the path of making a difference, focusing on engineering ships and offshore equipment. The manufacturing products are based on core research, development and supporting advantages. Shipbuilding reflects the comprehensive industry level. The design and development capabilities involve the basic industrial level of raw materials, and support capabilities including effective control of core technologies," said Li.
China has the world's largest commercial shipbuilders, like Zhenhua.
They are producing increasingly sophisticated ships and vast networks of ports, shipping lines and trade links.
"China was unable to make a ship; now it's become a shipbuilding power. Indeed, the entire industry, the overall support, management control, have all been gradually improving," said Li.
The naval parade off east China's Qingdao City on Tuesday to mark the 70th anniversary of the founding of the Chinese People's Liberation Army (PLA) Navy was a showcase of China's best warships. The world's second largest economy is shaping its Navy to be a key maritime power.
"Although Zhenhua has not built such warships, if we judge by the connections and features of these vessels, we can see that the country has had so many warships put into service in such a short period of time, which truly reflects the steady promotion of the industry's overall industrial and manufacturing level," said Li.
China has the world's largest shipbuilding infrastructure, and its development enjoys top-level leadership support.
Zhenhua's strength has won recognition around the world. Its Goliath crane was used for assembly of the UK's Queen Elizabeth class aircraft carrier.
Li Ruixiang said the design and production of marine machinery can be more sophisticated than for an aircraft carrier and that's where Zhenhua's strength lies.
"Zhenhua's dream is to make the best port machinery products. We want to provide more support for the country's maritime strength," he said.
Source:cctvplus