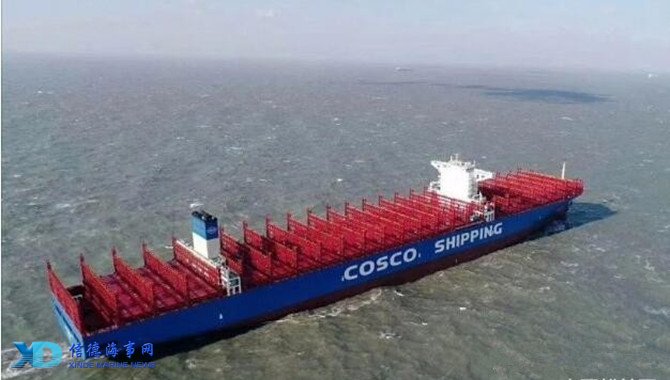 China's largest container ship with a cargo capacity of 20,119 twenty-foot equivalent units (TEU) was officially handed over to its orderer at a port in Shanghai on Tuesday.
The ship, assembled by the Shanghai Waigaoqiao Shipbuilding Co., Ltd., was handed over to the China Ocean Shipping (Group) Company (COSCO), and will soon be used to transport goods from China to foreign countries.
A naming ceremony was held on the same day to give it the name: "COSCO Shipping Virgo".
The ship was designed with a maximum cargo capacity of 200,000 tons, and a sailing speed of 22.5 nautical miles per hour. Besides, the ship has an enhanced capacity in transporting special containers, such as higher and heavier ones, and those loaded with frozen goods and hazardous articles.
Though the ship is around 400 meters in length and 60 meters in width, covering an area of four standard football ground, only 22 crew member are enough to operate because various automation technologies have been applied in such systems as navigation control and satellite communication.
"The ship is so advanced and smart. On the screen, we can read all the navigation information, including sailing speed, direction, weather and yawing moment. We can operate the main engine here, and only one crew member can do it," said Shen Zhongyi, captain of the ship.
Apart from automation, the ship was also installed with fuel-saving facilities, which will improve the efficiency of energy use in voyage.
"A previous 10,000-TEU ship could consume almost the same amount of oil as the 20,000-TEU one. Therefore, the average oil consumption for each unit has been reduced a lot, which means the transport cost will be accordingly lowered," said Yu Lai, deputy chief engineer of the Marine Design and Research Institute of China.
After put into use, the ship is expected to sail to Far East and European countries, and serve China-proposed Belt and Road Initiative.
"The 20,000-TEU container ship will be put into use along the major routes toward Europe, and play an important role in implementation of China's Belt and Road Initiative. Now we are building another six 21,000-TEU ships, and nine 22,000-TEU ships with double fuel engines. All the ships will strengthen China's shipbuilding industry," said Wang Qi, chairman of Board of Shanghai Waigaoqiao Shipbuilding Co., Ltd..
Sources:cctvplus