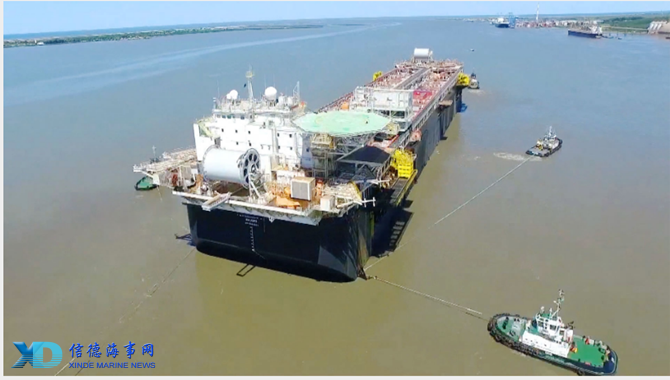 China's first self-built world-class vessel for floating production, storage and offloading (FPSO) was handed over to Brazil in Qingdao City of east China's Shandong Province on Wednesday.
According to China National Offshore Oil Corporation, this is the most complex FPSO vessel China has ever delivered to a foreign country, whose building involved the largest amount of engineering work and the highest technological requirements.
The FPSO vessel, or Petrobras 67, is over 300 meters long and around 74 meters wide. Its deck is equivalent to the total area of three standard football fields. Around 4.5 tons of steel and 1.5 million meters of cables were used in its building.
As one of the mainstream processing, storage and transport systems for maritime oil and gas production, the vessel, with an operation depth of 2,200 meters, can produce 150,000 barrels of oil per day, and store 1.6 million barrels at most. It can also process 6 million standard cubic feet of natural gas per day.
In addition, the vessel has the largest water displacement is 350,000 tons and is equipped with a building that can accommodate 158 workers and a helipad.
"This giant vessel is the most advanced and one of the largest FPSO vessels in the world. It was a huge challenge for us to build such a big vessel. It can process 150,000 barrels of crude oil a day, or around 10 million tons a year," said Jin Xiaojian, chairman of the CNOOC.
The delivery of the vessel indicates that China will further strengthen energy cooperation with other countries, and promote "made in China" products overseas.
"The completion of the FPSO vessel marks that the CNOOC has capability to design, build and test large FPSO vessels. The project also proves that China's 'Belt and Road Initiative' and 'Go Out Policy' have brought opportunities for Chinese enterprises to show their capacities and for the world to share China capacity and China speed," said Jin.
Sources:cctvplus