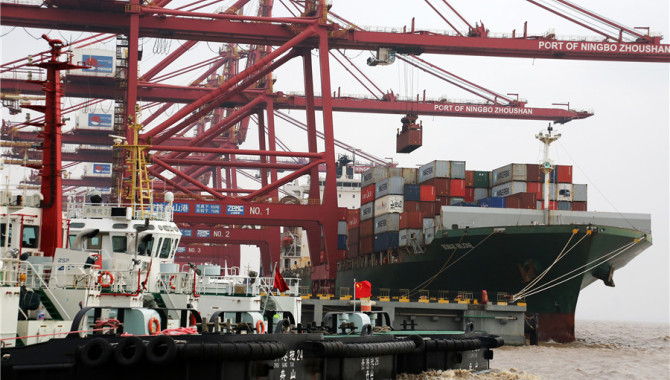 Brazilian mining company Vale and Ningbo Zhoushan Port Group has held a ceremony on Aug 25 in Ningbo to celebrate the inauguration of the Shulanghu Grinding Hub, the firm's first such operation in China.
Located in the Shulanghu Ore Transfer Terminal in Zhoushan city, Zhejiang province, the Vale Shulanghu Grinding Hub is designed to have a total of three production lines, with a total nominal capacity of 3 million tons per year.
"Vale is enriching our product portfolio to better meet China's increasing demand for quality, environmental performance and innovation in a new era, and Vale will continue to contribute to China's greener future," said Marcello Spinelli, executive director of Ferrous Minerals of Vale.
The Shulanghu Grinding Hub is the result of an extensive partnership between Vale and the NZP Group that dates back to 2016 when the two parties began to cooperate on ore blending to produce Brazilian Blended Fines (BRBF).
Jiang Yipeng, deputy general manager of Zhejiang Seaport Group and Ningbo Zhoushan Port Group, said the hub is a key milestone in deepening the partnership and enhancing synergy between Vale and Ningbo Zhoushan Port, and an important symbol of production capacity upgrade and high-quality development of the Shulanghu Terminal.
Ningbo Zhoushan Port is the world's largest port with rich port resources and a deep-water coastline, as well as an important iron ore transfer base in Northeast Asia.
In 2019, the total cargo throughput of Ningbo Zhoushan Port reached 1.12 billion tons, ranking first worldwide for 11 consecutive years.
Source:Chinadaily