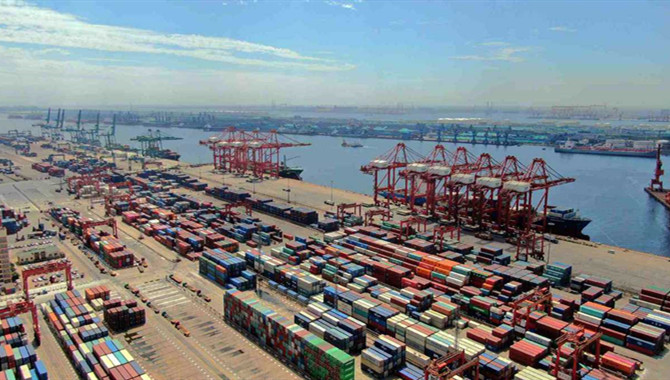 The Tianjin Port Group realized throughput of 1.365 million standard containers in January, up 7.5 percent year-on-year, with the growth rate ranking the first in the country's coastal ports in the period.
The port on the coast of the Bohai Sea is a pivotal offshore shipping outlet for the Beijing-Tianjin-Hebei region. In the face of the outbreak of the novel coronavirus (COVID-19), the port has offered around-the-clock freighter shuttle service for customers to avoid mass gatherings of personnel in the port area since Feb 25.
"The port's freighter service has not only solved the problem of insufficient transportation during the epidemic control but also saved us nearly 44,000 yuan (around $6,350) in transportation costs," said Gong Jingliang, deputy general manager of the North China region of the Zhonggu Shipping, who has been busy sending cargo ordered by 20 companies.
The Tianjin Port Group has announced exempting storage fees of both empty containers and loaded containers from domestic and foreign trade companies at its shipping terminals from Feb 26 to March 6.
Chu Bin, the group company's chairman, said the company has the "ability and confidence" to help trade and logistic firms win the battle of resuming work and production impacted by the epidemic.
He said the company has been operating throughout the Spring Festival holiday and the epidemic control period while taking effective epidemic prevention measures.
Source:Chinadaily