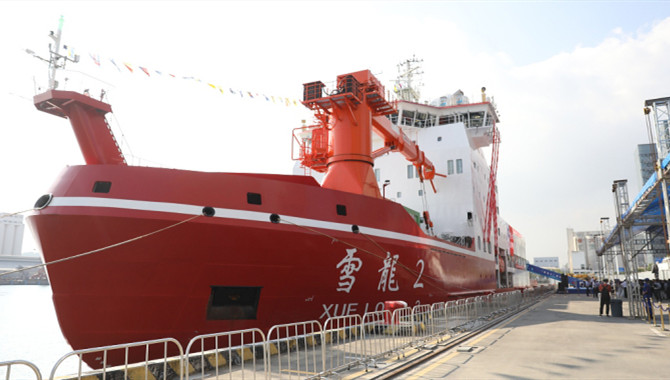 China's polar icebreakers Xuelong (Snow Dragon) and Xuelong 2 met at the Port of Hobart in southern Australia on Thursday, the first time for two Chinese icebreakers to meet at a foreign harbor.
Setting off from Shenzhen City of south China's Guangdong Province in October, China's first domestically made polar icebreaker Xuelong 2, or Snow Dragon 2, arrived at the Hobart Port on Monday for replenishment before entering the Antarctica for China's 36th Antarctic expedition.
The more experienced icebreaker Xuelong, which set off from Shanghai on Oct. 22, arrived at the port on Thursday.
A total of 180 Antarctic expedition team members on Xuelong will stay at the port for two days and join the expedition, making it the first time that two polar icebreakers work together on China's Antarctic expeditions. The team members said they feel excited for the upcoming mission.
"We feel very close with each other and all of a sudden we're all together and we can visit each other," said a team member.
"This is my first expedition to the Antarctica, and I can't put it into words. I have been working in geology for 30 years. It is not easy to see Xuelong and Xuelong 2 at the same time," said another team member.
"I feel very excited and I also envy them. After all, Xuelong is old while the equipment on the Xuelong 2 is advanced. We are looking forward to boarding Xuelong 2 and going to the Antarctic together," said Zhu Bing, captain of Xuelong.
Xuelong 2 set off from the port on 16:45 for the 36th Antarctic expedition, with aims to understand the influence of Antarctic changes on the world, improve China's ability to cope with climate change and increase participation in Antarctic global governance.
Source:cctvplus