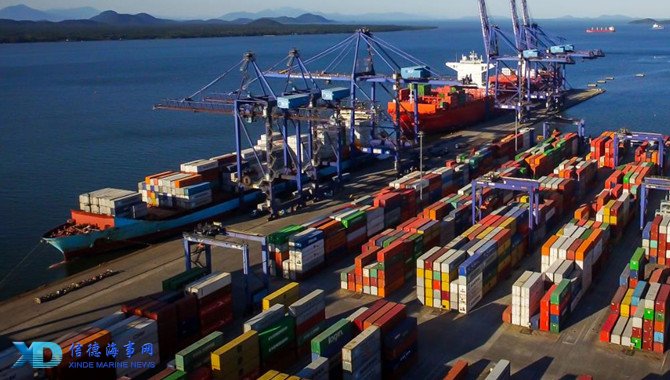 The image from Internet for reference only.

China's acquisition of one of Brazil's most profitable container terminals earlier this year highlights the growing trade and investment ties between BRICS countries.
Moreover, with Chinese President Xi Jinping's upcoming visit to South Africa for the BRICS summit from July 25 to 27, trade and investment exchanges between China and Brazil, as well as with other BRICS member countries, will get much closer.
The Terminal de Conteineres de Paranagua (TCP) port in Paranagua, the second largest container terminal in Brazil, is located in the southeast state of Parana. It serves a region that generates almost half of the county's GDP. In February this year, the state-owned China Merchants Group acquired 90 percent interest in TCP's 30-year concession for 925 million U.S. dollars. It is the biggest deal ever for a port in Latin America. The company said this massive injection of capital will increase the company's productivity.
"Our capacity today is 1.5 million containers per year. So after this investment that we are pursuing now, we are going to go to 2.5 million containers per year. This positions TCP as one of the largest terminals in Brazil and Latin America," said Alexandre Rubio, CFO of the TCP Terminal.
According to Rubio, there are good reasons for Chinese interest in the port.
"So 25 percent of all the trade in containers, it's going to or coming from China, so having now this big brother -- China Merchants Port -- owning TCP, we think that we can grow even faster in the future because of all these Chinese cargo that we have here in our region," he said.
This includes enlarging the dock and buying two new cranes, among other improvements this year alone, giving the port the capacity to receive some of the world's biggest ships.
Having controlling interest in the mega terminal is part of a new wave of investments in Brazil by Chinese companies. It is a move into logistics, a key sector for boosting trade between the two countries.
There has been a Chinese presence in Paranagua since 2013, starting with the China Communications Construction Company (CCCC) which was awarded dredging contracts for the port's channels and basins. All indications are that with increased port traffic and vessel size, the dredging volume will only increase.
"There is a lot of business between China and Brazil. I think our work can improve the efficiency of the transport to Asia and the business between these two companies," said Li Yijun, the dredging vice project manager at CCCC.
Sources:cctvplus