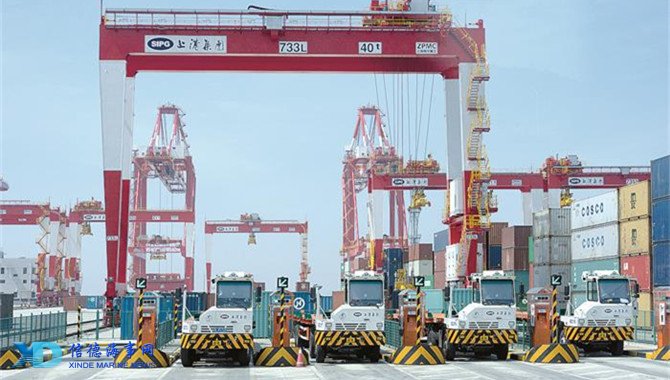 The procedure requiring a document to transfer a cargo container, used at Shanghai Port for nearly three decades, has finally been retired with the introduction of automation, according to China Transportation News Network.
The old procedure was known as an equipment interchange receipt.
The change will greatly reduce the time it takes to transfer containers, increase logistics efficiency, improve road traffic and lower transportation costs.
Up to 68 liners, seven container terminals operated by the Shanghai International Port Group, and more than 50,000 trucks and their drivers will benefit from the change.
About 15 million equipment interchange receipts operated at Shanghai Port, and the paperless procedure will save more than 400 million yuan ($60 million) in cost, and shorten the cargo arrival to collection time from 4.5 days to between 12 and 24 hours.
The paperless procedure is just one of the latest efforts made by Shanghai to develop a smart port.
SIPG Chairman Chen Xuyuan said: "Smart ports are what future ports are going to be. This is a systematic eco-system with the combination of the state-of-the-art technologies of the internet and internet of things."
In December, a fully-automated container terminal with an investment of 14 billion yuan started operating at Yangshan Port of Shanghai. Previously, the only global suppliers of port automation solutions were foreign companies.
The automated terminal, or the fourth phase of the Yangshan Port project, is designed to handle a maximum of 6.3 million TEUs (20-foot equivalent units), making it the largest automation port worldwide. Its energy consumption system should result in zero carbon dioxide or other emissions while allowing savings of up to 70 percent.
The automatic port intellectual production management control system, or TOS system, acts as the brain of the new port, which covers 2.23 million square meters. The system was researched and developed independently by the 200-plus members of the research and development team at SIPG.
"Mechanization has greatly saved labor costs," said Ding Songbing, general manager of the strategy and research department at SIPG. He said SIPG had more than 50,000 employees in the 1980s, and its annual cargo volume was less than 100 million metric tons before 1984, in stark contrast to the Port of Shanghai's current cargo volume of 750 million tons and 17,000 employees.
"All the 16 quay cranes, 40 rail-mounted gantry cranes, and 80 vehicles are automatically guided at the terminal, and 230 people are doing the same volume of work that more than 800 do at a conventional terminal," Ding said.
Ding added that more efforts are needed as the port and Shanghai are continuously seeking higher efficiency on the way to becoming an international shipping center.
By promoting the same standards and sharing data and information, ports in the Yangtze River Delta region as well as those in Yangtze River Economic Belt will be able to collaborate with each other to improve development, Ding said.
Sources:chinadaily