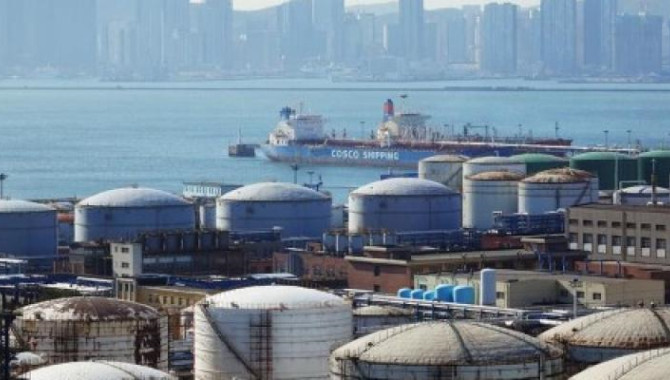 Saudi Arabia and Russia are in a tight race to become China’s top oil supplier in 2020, with both countries boosting crude exports to the economic powerhouse even as the coronavirus pandemic hit global demand for oil this year.
Saudi Arabia, which was China’s top supplier last year, has exported between 1.6 million and 1.7 million barrels per day (bpd) of crude from January to November 2020, as deep price cuts gave Saudi oil exports a boost this month, according to analytics firms Refinitiv, Vortexa and Kpler.
It was catching up with Russia which has exported about 1.7 million bpd of oil to China so far in 2020, with Iraq at a third place with about 1.2 million bpd.
The oil industry has been hard hit this year as the coronavirus pandemic hurt business activity and ground the travel industry to a virtual halt.
China, the world’s top crude importer, is one of the few countries to have boosted purchases in 2020, as buyers made the most of low prices earlier this year, while fuel demand recovered from the second quarter along with the broader economy.
“It looks like Russia has displaced Saudi Arabia to clinch the top spot this year,” said Serena Huang, analyst at Vortexa. “It is a neck-and-neck race and it remains to be seen as to who will be the ultimate winner.”
The volume of Saudi crude arriving in China in November is expected to hit between 2.13 and 2.24 million barrels per day, compared with a record high of 2.1 million to 2.14 million bpd in May, estimates from the three companies showed. That would be nearly double their volume estimates for October.
The rise comes as state oil giant Saudi Aramco 2222.SE sharply cut crude prices for Asian customers in October, trade sources said. It takes about a month for cargoes to be shipped.
By comparison, 1.49 million bpd of Russian crude is expected to enter China this month, down from 1.55 million bpd in October, Vortexa said.
The bulk of the incremental crude arriving from Saudi Arabia, the world’s top oil exporter, into China in November is entering via ports in the cities of Quanzhou, Zhanjiang, Zhoushan and Ningbo, Refinitiv analyst Emma Li said.
“Congestion is starting to increase again off Chinese ports, so there may well be some additional slippage into December but the overall picture will remain the same,” said Alexander Booth analyst at Kpler, which included shipments via Myanmar in its estimates for China’s oil imports.
While all of China’s top three suppliers have increased daily exports this year, Iraq saw the biggest rise in oil exports to China so far in 2020, buoyed in part by deliveries into commercial storage tanks held by the Shanghai International Energy Exchange.
Its crude exports to China rose by nearly 190,000 bpd in the first 11 months of this year versus full-year volumes in 2019, according to Reuters’ calculations based on Vortexa data.
Source:Reuters