Beware of the danger of in-transit fumigation 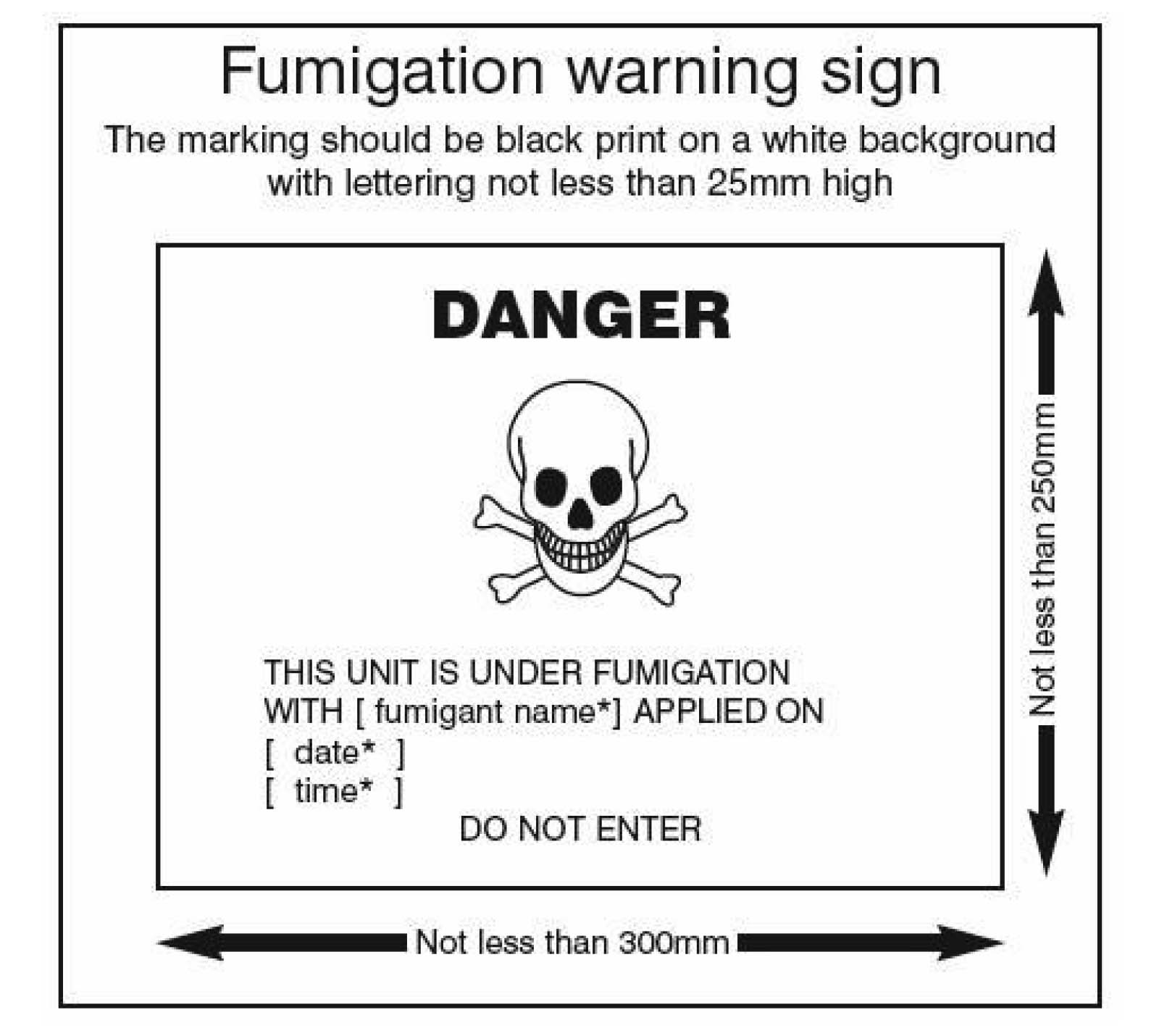 Many agricultural bulk cargos and forestry products are required to undergo fumigation on board ships to prevent infestation. However, to achieve the efficacy, the fumigation operation started at the load port often needs to continue in transit to the discharge port. Such “in-transit fumigation” may endanger the safety and lives of crew members and shore-based personnel if not handled properly. The toxicity of the fumigant makes it extremely important to raise awareness of the dangers of in-transit fumigation.
In transit fumigation begins at the load port with application of the fumigant in the loaded cargo holds by an expert “fumigator in charge” followed by gas-tight sealing of the hatches. The process is intentionally continued in the sealed space during the voyage. According to IMO Recommendations on the Safe Use of Pesticides in Ships applicable to the Fumigation of Cargo Holds (IMO Safety Guidelines), in transit fumigation is at the discretion of the master. However, the process is common for agricultural products. This is reflected in the 2015 BIMCO clause that provides time or voyage charterers with the option to fumigate cargo in transit at their cost and risk provided the fumigation is in conformity with the IMO Safety Guidelines.
Hydrogen phosphide (phosphine) is the fumigant used in transit. Phosphine gas is toxic and in concentration, fatal to humans. Inhalation of this fumigant may cause respiratory problems, nausea and ultimately suffocation. Tragically, seafarers have lost their lives due to leaks into accommodation spaces or by entering an enclosed space where the gas is active. In addition to its toxic properties, phosphine gas may ignite spontaneously in air at concentrations above its LFL (Lower Flammable Limit) of 1.8%. Explosion can occur at high concentrations and may cause severe damage to the holds and hatch covers as well as personal injury to crew and shore-based workers.

Safety steps for in-transit fumigation
·The IMO Safety Guidelines specify that at least two members of the crew (including one officer) after receiving training, should be designated as the trained representatives of the master responsible for ensuring that safe conditions in the accommodation and working spaces are maintained in-transit. Training includes familiarity with the relevant Safety Data Sheet and recommendations of the fumigant manufacturerconcerningmethods of detection of the fumigant in air, its behavior and hazardous properties, symptoms of poisoning and treatment and emergency procedures.
·Pre-fumigation Inspection: As part of the process of determining whether in-transit fumigation can be carried out safely, the trained representative of the master and the fumigator in charge appointed by the shipper/charterer should conduct a thorough pre-fumigation inspection of the vessel, while the holds are empty. Such an inspection will also ensure that the fumigation team is fully aware of the vessel’s condition, e.g., whether the relevant cargo holds are sufficiently gas-tight to prevent seepage of toxic gas to the accommodation and/or working spaces.
The fumigator in charge should present documentation attesting his competence and that of his team, as well as the letter of appointment from the shipper/charterer.
The fumigator in charge should provide to the master a written statement attesting the result of the pre-fumigation inspection, as well as the intended fumigation procedure, including specific comments regarding the type(s) and quantity of fumigant to be used in each hold, the hazards involved and safety precautions to be taken.

·Familiarization: Prior to any fumigation, the master must ensure that the relevant officers and crew have been made familiar with the fumigant label, detection methods, as well as safety and emergency procedures.
·Equipment: Adequate respiratory protective equipment and gas detection equipment must be available on board and the crew should be well trained in how to use the specific equipment. The fumigator in chargeshould also ensure that the necessary equipment on board is in good condition and that adequate equipment is available to monitor the air in accommodation and working spaces. The relevant officers and crew must also be shown how to use the equipment.
·Commencing fumigation and checking for leaks: Fumigation must not commence until all cargo operations have been completed and all unauthorized personnel have left the unsafe areas of the ship. The fumigator in charge must remain on board long enough for the gas concentrations to build up to a level where testing for leaks can be carried out. Prior to final departure from the ship, the fumigator in charge shall furnish the master with a certificate stating that each hold has been checked for leakage and proper sealing and that all living and working spaces are gas-free.
·Warning signs and sealing off unsafe areas: All crew members on board must be made aware of the spaces that are being or have been fumigated, and hence are considered unsafe. This may include adjacent spaces which have not been treated. All entrances to unsafe areas must be posted with adequate “Poisonous Gas” warnings, properly signed and dated by the fumigators. Often, as an additional safety measure, plastic sheeting is used to seal off areas adjacent to hold access points. Special attention should be paid to the dangers of adjacent spaces to cargo holds where fumigants may leak and linger even after the fumigated cargo has been discharged.
·Monitoring during the voyage: During the voyage the PH3 concentrations in living or working spaces should be monitored at regular intervals as instructed by the fumigator-in-charge, in order to detect any unexpected gas seepage as quickly as possible. The IMO Safety Guidelines specify 8 hour intervals or more frequently if so advised by the fumigator in charge. The readings should be recorded in the vessel’s log book.
·Dispersal of fumigant gas: The fumigator in charge should also issue instructions stating how the fumigant gas is to be dispersed at the end of the period of exposure. This is usually done via the hold ventilation system and/or by opening the hatches. During dispersion it is important to avoid gases blowing into enclosed accommodation/working spaces and to keep persons away from the holds. The IMO Safety Guidelines specify that not less than 24 hours in advance of arrival at the discharge port, the master should inform the appropriate authorities that in transit fumigation is being carried out and whether ventilation is in process.
·Disposal of fumigant residues/remnants: Instructions should also be given by the fumigator in charge at the load port on how fumigant residues/remnants are to be safely and properly disposed of using appropriate safety equipment. If the instructions are that this will be done by shore labor at the discharge port, those representing cargo interests should be advised before discharge commences.

Top up fumigation of log cargos
Unlike grains, log cargos require additional “top up” fumigation while in transit. This process has been done by an expert fumigator in charge who begins the fumigation process at the load port and sails with the vessel to discharge port.
For logs bound for China, the Covid-19 pandemic restrictions have changed this practice and charterers continue to request that the crew perform the top up in-transit under remote supervision and without an expert fumigator on board.
Handling fumigants by crew is not recommended
The IMO safety guidelines states that the crew should not handle fumigants and requires fumigation to be conducted by qualified operators.The BIMCO Fumigation Clause provides that the charterers have the option to fumigate the cargo holds in transit. However, “such fumigation shall be performed always in accordance with IMO Recommendations on the Safe Use of Pesticides in Ships applicable to the Fumigation of Cargo Holds, MSC.1/Circ.1264 (IMO Recommendations) and any subsequent revisions” Thus, the inclusion of the BIMCO Cargo Fumigation Clause does not necessarily include the top up procedure as top up requires the crew to handle the fumigant which is contrary to the IMO recommendations.
Due to COVID restrictions, some flag and port states have approved the use of crew members,trained and deemed competent by a fumigation company, to carry out the on-board technician role involved in fumigant (phosphine) top up and leak testing. This practice should not continue once COVID restrictions have eased. Should Members be pressed to accommodate the charterer’s request to perform top up fumigation of logs or any other cargo by the crew, Members should seek guidance from the Club.
The importance of considering symptoms of phosphine gas exposure
According to the Centers For Disease Control, the symptoms for mild to moderate exposure to phosphine gas include: severe lung irritation; chest tightness or burning chest pain; cough, sometimes productive of fluorescent green sputum; difficulty breathing or shortness of breath (dyspnea); and accumulation of fluid in the lungs (pulmonary edema).

Cardiovascular effects include abnormally low blood pressure (hypotension), irregular heart rhythm (dysrhythmia), and decreased ability of the heart to pump a normal blood volume. Nervous system effects include headache, restlessness, irritability, dizziness, lethargy, drowsiness, fatigue, loss of feeling, impaired gait, trembling of the extremities during movement, and double vision. Gastrointestinal effects include nausea, vomiting (emesis), diarrhea, abdominal pain, gastrointestinal distress, and liver injury. General effects include sweating and bluish discoloration of the skin (cyanosis).
In the case of illness among crew members during fumigation operations one must never exclude the possibility that the individuals may be suffering from poisoning by the toxic fumigant gas. There are cases of crew members thought to have been suffering from seasickness or food poisoning and told to go to bed, never to wake up again. If there is a gas leak into the accommodation area, the worst place to stay could be the cabins.
There is no antidote to phosphine poisoning. Treatment consists of supporting respiratory and cardiovascular functions. In an emergency onboard a ship it is important to get the victims into fresh air.
The IMO Safety Guidelines on fumigation specify carriage aboard a copy of the latest version of the Medical First Aid Guide for Use in Accidents Involving Dangerous Goods (MFAG). The Guide is reproduced in the Supplement of the IMDG Code. Information about on-board treatment for inhalation of poisonous gases can also be found on the Mariners Medico Guide.
The Mariners Medical Guide is a digital app designed by doctors specialised in maritime medicine as an assessment tool specifically for seafarers while at sea. It is possible to search by symptoms as well as condition, and it is written in easy-to-follow language and steps. It can be downloaded for free for desktop as well as Apple and android mobile devices. Once downloaded, the medical guide is available without internet access. The Mariners Medico Guide includes contact details and links to shore based telemedical assistance and is approved by the Norwegian flag state.