2022-11-22 11:15By： LR
A joint study released by Environmental Defense Fund (EDF), Lloyd’s Register (LR) and Ricardo PLC, examines the potential marine environmental impacts of ammonia spills during its use as a shipping fuel.

Ammonia generated from renewable energy is considered a sustainable alternative to fossil fuels as the shipping industry decarbonises. The study, which used extensive modelling due to the scarcity of real-world data, focuses specifically on the impacts of large ammonia fuel spill scenarios on marine habitats.
Potential effects on aquatic environments and associated ecological receptors were assessed in scenarios if a spill were to occur during bunkering, or in the case of a ship’s collision and sinking. In addition, possible mitigation measures and specific spill management practices for these scenarios were modelled and studied.
“The shipping industry must make a rapid energy transition to address the climate emergency. But it is also clear that we must proceed with caution. We owe it to future generations to ensure we are championing true climate solutions that will not negatively impact our rivers, our oceans or our health,” said Marie Hubatova, Director of Global Shipping for EDF's Global Transport team. 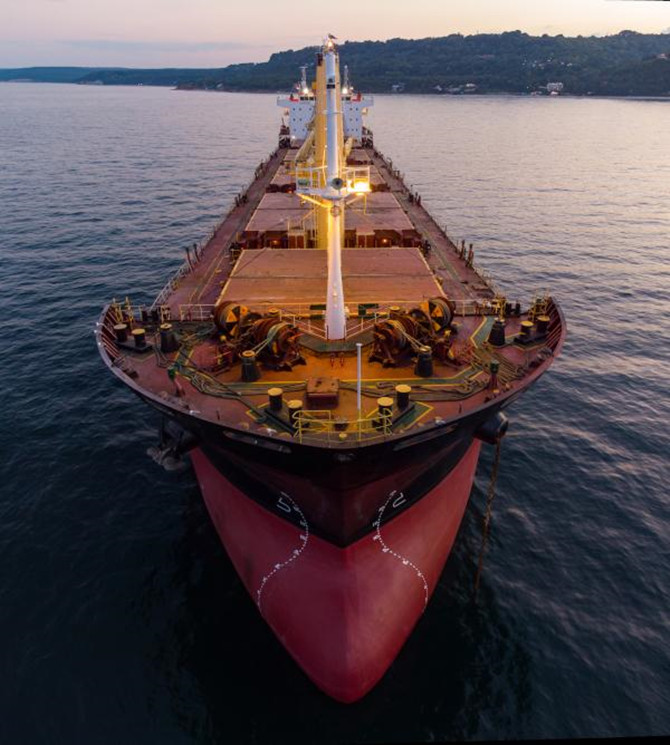 The study examined potential ammonia fuel spills during bunkering and collision scenarios, under a variety of conditions, including time of day, temperature, humidity and solar radiation. The outputs were tested across eight habitats (rivers, estuaries, wetlands, coastal waters, coral reefs, mangroves, polar regions and the deep sea) using multiple ecological receptors (bacteria, plankton, macrophytes, invertebrates, fish, birds, reptiles, and marine mammals).
The study found that estuaries, mangroves and wetlands are particularly sensitive to potential ammonia fuel spills compared to the polar regions and the deep sea. Within these habitats, it is typically fish which are most sensitive to an ammonia spill, with birds and mammals to a lesser degree.
Lauren Dawson, Senior Consultant, Water and Environment Practice, Ricardo, said: “Examining the impact of ammonia is a challenge because of the vast conditions a ship might face while at sea or even when bunkered. Critical factors to consider include the various ship and storage types, the underlying principles which determine the fate of ammonia in the environment, and the diversity of aquatic habitats and species that could be affected. Ultimately, what we found is that ammonia is more threatening to fish species, and particularly to ecosystems with less saline water and higher temperatures. It is therefore important to study the impact of ammonia carefully for particular regions where these habitats intersect with major shipping channels and ports, such as the Strait of Malacca. The findings of the report provide an excellent step forward to delivering a baseline upon which future assessments can be refined.”
The results were then compared to previously studied habitat and species sensitivity to conventional oil-based fuels. Overall, an ammonia spill has a relatively smaller dispersion distance and lower persistence within the environment when compared to heavy fuel oil (HFO) and marine gas oil (MGO).
Existing reports show that oil-based fuels have higher impacts on invertebrates and birds, compared with ammonia. Ammonia has a medium impact on all other ecological receptors, except bacteria, whereas oil-based fuels have medium impacts on plankton, fish, macrophytes, reptiles and marine mammals (see the Table summarizing the environmental impact level in page 5 of our summary report).
While the maritime industry has prior experience with ammonia transported in gas carriers and used as refrigerant, the introduction of ammonia as a shipping fuel creates new challenges related to safe bunkering, storage, supply and consumption for different ship types. The potential toxicity of ammonia cannot be ignored; without mitigation measures and solid spill management practices, an ammonia fuel spill could have negative impacts on aquatic environments. Therefore, a robust regulatory framework must be developed for ammonia to be a viable, low carbon alternative for shipping.
“There are many questions around the use of ammonia as a shipping fuel. Studies like this support the industry’s understanding of the environmental impacts as well as the operational and safety challenges. Greater clarity about the risks posed to marine ecosystems will allow industry stakeholders to make better informed decisions on the multiple transition pathways under consideration,” said Andy Franks, Senior Risk Specialist, LR Maritime Decarbonisation Hub.
This study presents a first look at ammonia's potential ecological impacts as a fuel. Further research is needed to evaluate the full range of ecological and health implications (especially to a ship’s crew) of ammonia, including the increased nitrogen deposition from chronic ammonia leakage and combustion by-products to determine its safety.
“All future fuels come with specific challenges. We have been using oil to power ships for almost a century now and we had to learn how to do so in a safe way. We can't go through the same process with ammonia,” said Ricardo’s Hubatova. “We have to make sure we get it right from the very beginning. A robust regulatory framework and good management practices are essential for the safe use of ammonia.”
Depending upon its safety, ammonia produced with renewable energy is already projected as one of the possible main future fuels of shipping. It is estimated that maritime shipping emits approximately 1,056 million tons of carbon dioxide (CO2) per annum and is responsible for nearly 3% of global greenhouse gas emissions.