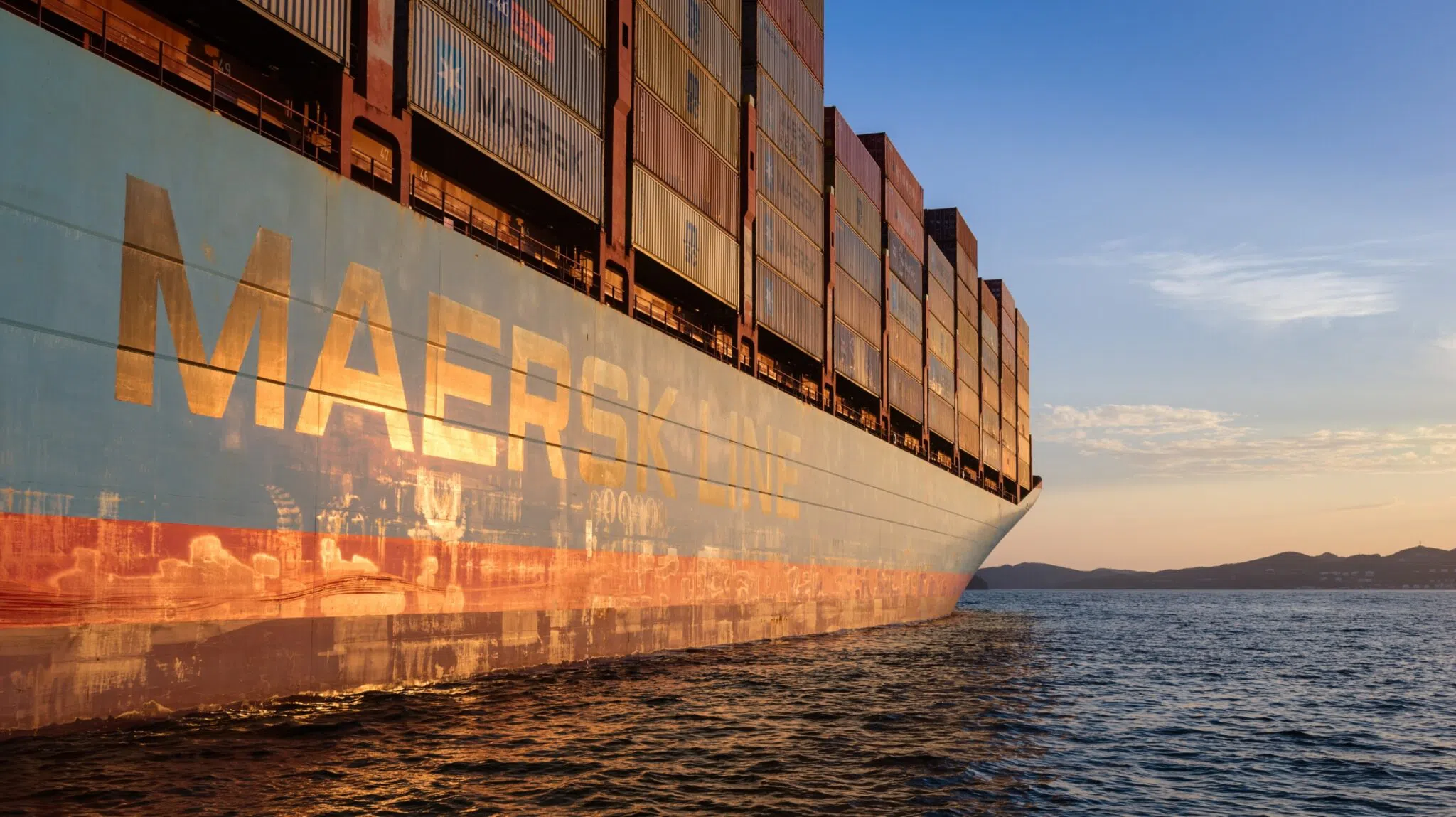 It's getting increasingly ugly for shipping lines in the trans-Pacific market. Spot rates are sliding relentlessly with each passing week. Liners are starting to suspend entire service strings: Maersk just dropped two trans-Pacific services, MSC and Matson canceled one each.
Is Maersk CEO Soren Skou — whose company operates the world's second largest liner company — getting worried yet?
He doesn't sound worried, at least, not about Maersk itself.
Skou addressed questions on current market conditions during a live Reuters Newsmaker interview on Thursday. He voiced no concerns about Maersk and kept earnings guidance unchanged. However, his comments on sinking demand implied that carriers with less contract coverage and land-based logistics business than Maersk have something to worry about.
Demand drops 'significantly'
“We have significantly less demand, especially for [shipping of] durable goods,” said Skou. “We see demand globally being driven down. Not as much by a recession or inflation, but more by the fact that there was overdemand during the pandemic.
“When many of us were not able to travel and spend money on services, we all upgraded our houses in different ways. And we don't need another flat-screen or another washing machine or another couch.” 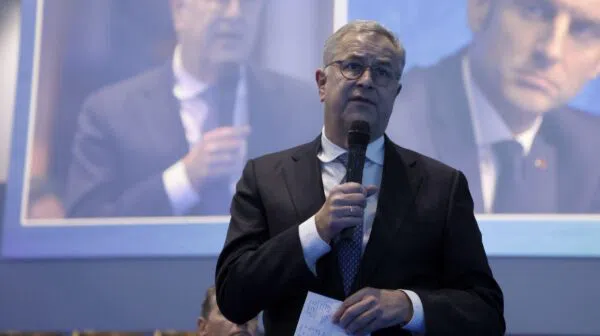 Maersk CEO Soren Skou (Photo: AP Photo/Ludovic Marin)
“We clearly see an impact, particularly in Europe and to some degree in the U.S., of consumers not being able to buy quite the same amount of things as before because of increased pricing,” said Skou. “In Europe, consumer confidence is also probably quite negatively influenced by the war at our doorstep.”
Cargo volume in the current Christmas import peak season is “perhaps less than what it had been,” Skou acknowledged, although he pointed out that this is largely because “the normal cyclicality of global trade has been suspended for the last couple of years. We’ve been buying products in large volumes at times of the year we don’t normally buy them.”
Pandemic effect now in reverse
Skou sees the current ocean shipping supply-demand dynamic as the reverse of the one driving the pandemic peak.
“If you go back to late 2020 and the beginning of 2021, when everything really took off from a demand and congestion point of view, on one hand, we had sharply increasing demand for goods around the world, partly driven by lots of stimulus into the economy. At the same time, supply of labor was constrained because of people being ill or being restricted from going to work. So, we had this double effect of both more demand and less [transport] supply.
“Right now, it's working in the other direction,” he said. There is significantly less demand “at the same time we see labor coming back because there are no [COVID] restrictions.”
There's not only more labor. There are also more ships in service, because fewer vessels are stuck waiting for berths. “Of course, we still have congestion. That situation has not normalized yet,” said Skou, pointing to strikes affecting European ports and ongoing queues off other ports. “But it is clearly getting better.”
Maersk guidance holds firm
As cargo demand declines and transport capacity rises, spot rates fall.
Maersk held its second quarter conference call on Aug. 3. Since then, the weekly Drewry Shanghai-Los Angeles spot rate assessment has fallen 48% and the Freightos Baltic Daily Index (FBX) spot assessment for China-West Coast has plunged 56%.

Asia-West Coast spot index changes in $ per FEU since Maersk call. Blue line: FBX. Green line: Drewry (Photo: FreightWaves SONAR)
Asked by American Shipper whether spot rates had fallen faster than Maersk expected, Skou replied, “I think we've said all the time that we expected the normalization was going to come relatively rapidly, because you would have this effect of both a drop in demand and a release of capacity.
“It's exactly the opposite of what happened in early 2021. We're now seeing less demand and more supply, which means we will have a relatively rapid normalization of freight rates.”
As of Aug. 3, Maersk's guidance was for full-year 2022 earnings before interest, taxes, depreciation and amortization of $37 billion, 54% higher than the record $24 billion EBITDA last year. Maersk predicted EBITDA of around $10 billion for Q3 2022 and $7 billion for Q4 2022. Maersk estimated that the 2022 full-year change in global container freight demand would be minus-1% to plus-1%.
Skou reaffirmed this earnings and demand guidance on Thursday, despite the sharp fall in spot rates over the prior eight weeks. To put the timing of his latest comments in context, Maersk now has a full picture of its Q3 2022 performance and should have substantial forward knowledge of its Q4 2022 bookings.
“We don't see anything to change the view we have for the year,” said Skou.
No hard landing predicted (for Maersk)
Reuters correspondent Jacob Gronholt-Pedersen asked Skou whether, given the worsening economic outlook, there would be more of a “hard landing” than a normalization.
“I don't see a hard landing [for Maersk],” said Skou, pointing to landside logistics and not ocean shipping as the savior.
Compared to other carriers, Maersk boasts a combination of more ocean contract coverage to offset ocean spot exposure and more land-based business to offset both ocean spot and contract exposure.
Maersk said during its August quarterly call that it has 71% of its long-haul volumes on contracts of a year or more, with those contract customers heavily skewed toward beneficial cargo owners as opposed to freight forwarders. “We have a very large share of our book of business in ocean on contract,” Skou reiterated on Thursday.
Meanwhile, Maersk has spent the past six years focused on becoming an end-to-end logistics provider, acquiring over 10 logistics companies.
“For Maersk, we expect to continue to see a modest development or weak demand on the ocean side,” said Skou. “Obviously, volumes in ocean will be flat or even declining this year. But we also expect to continue to grow very rapidly on the landside logistics side.”

Demand up for end-to-end logistics
Skou maintained that “demand for end-to-end logistics and integrated logistics has clearly gone up.”
“The pandemic meant that our customers are reconsidering global supply chains. They're thinking more about how much inventory they have and where it is. And about how many suppliers they have and where they're located. They're saying they can no longer rely on just one country. For many of them, that specifically means they are moving part of their production out of China. Most of them are also thinking in terms of omnichannel [distribution], fulfilling goods to both physical stories and to consumers directly.
“All of these things together mean that customers see the need for more integrated logistics. It complicates and fragments supply chains, which makes it even more important that you have a good logistics provider that can help you keep control of your supply chain.”