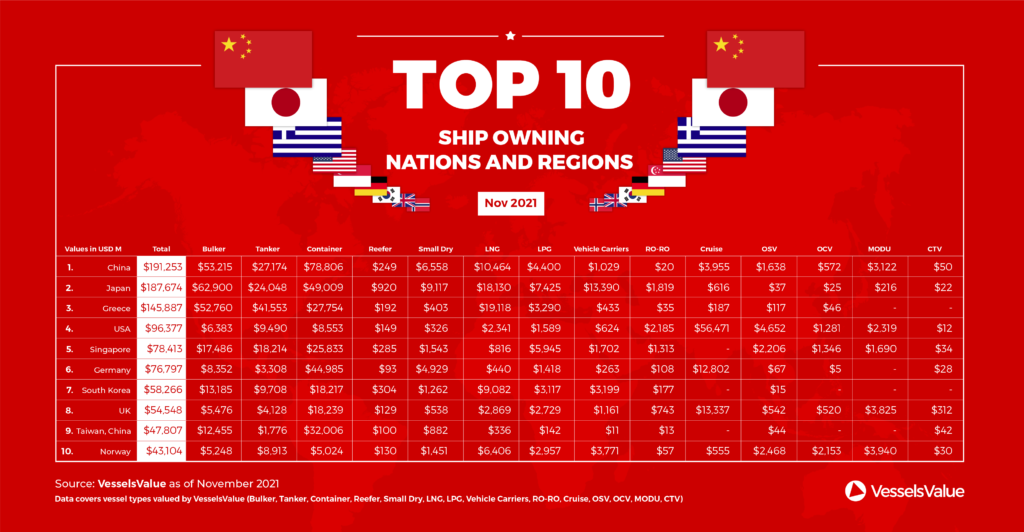 Download the full infographic
China
China has moved up from 2nd in January to 1st place this time, owning a total of USD 191 bn in assets.
China owns the largest number of Containers and, consequently, the recent surge in rates and values has moved them up the ranks to top spot in terms of fleet value. The increase in rates has also prompted an ordering spree across the Container sector, as owners' confidence in the market exploded. A total of 516 Containers have been ordered since January 2021, 46% of these orders were placed by Chinese companies including SITC and COSCO Shipping.
We have seen a significant increase in Bulker rates since the beginning of the year with the Capesize 54-TCA increasing from 16,656 USD/Day on the 1st Jan to a peak of 86,953 USD/Day on the 7th October, an increase of 420%. This has nearly doubled the total value of China's Bulker fleet over the past 10 months from USD 28 bn to USD 53 bn.

Japan
Japan has fallen from 1st to 2nd place, owning a total of USD 187 bn in assets. This is an increase of over USD 70 bn since January 2021, highlighting the booming Bulker, LPG, and Vehicle Carrier markets. Out of the top 10 nations and regions, Japan owns the highest value LPG fleet at USD 7.4 bn. Earnings and sales have caused an increase in the total fleet value by USD 1.6 bn since January.
The total value of Vehicle Carriers under Japanese ownership amounts to a staggering USD 13.4 bn, an increase of USD 6.1 bn compared to earlier in the year. This increase has been caused by the leading Japanese companies MOL, NYK Line and K Line ordering 26 newbuilds since the beginning of the year. Japanese shipyards have raised their tariffs to USD 100 mil for a dual fuel LNG, 7,000 CEU Vehicle Carrier, up a staggering USD 10 mil compared to last year.
Greece
Greece has bumped its way up to 3rd place in the rankings since January this year. Their total value increased from USD 93.2 bn at the beginning of the year to USD 145 bn. Greece is the largest Tanker owner and although earnings have been lingering at record lows, we have seen increases to spot rates which have brought up values for the entire fleet. Newbuilding values, and hence resale values, have increased between 20-30% across VLCCs, Suezmaxes and Aframaxes since the beginning of the year.
Greece is also the owner of the most valuable LNG fleet. With current spot rates soaring, the value of their fleet has increased by USD 2 bn since the beginning of the year.
Greece's Bulker fleet has almost doubled in value from USD 28 bn to USD 53 bn, as a result of the high rates. The Greeks remain active in the S&P market accounting for about a quarter of the Bulkers bought so far this year.

USA
The USA has fallen to 4th place since January this year with a total of USD 96 bn in assets.
USD 56 bn of this comprised of Cruise ships which come as no surprise as the largest Cruise companies, Carnival and Royal Caribbean, are both based in the USA. Despite the onslaught the industry has experienced due to the COVID-19 pandemic, the USA still hold their position as the largest global Cruise owner despite their fleet value decreasing by a total of USD 7 bn since the beginning of the year.
The US are also prominent owners in the RoRo sector owning a total of USD 2.1 bn, where the market has seen an increase in value of USD 1.2 bn from January.

Singapore
Singapore has remained at 5th place since January this year with similar gains in the Bulker and Container sector as other nations. Their investments in the Container sector followed the global surge, increasing their fleet value from USD 10 bn to USD 25 bn.
Since the beginning of the year, companies like OM Maritime and X-Press Feeders have capitalised on the roaring market and placed orders in smaller tonnages such as 2,700 and 1,800 TEU Containers.
In secondhand tonnage, one particular benchmark sale that took place was the RDO Concert (6,969 TEU, Dec 2009, Hyundai HI) which was sold to OM Maritime from D Oltmann Reederei for USD 110 mil, the highest price paid for a 2009 built Post-Panamax Container since 2007.
Germany
Germany has remained in 6th place owning a total of USD 76.8 bn. A large part of their fleet has always been comprised of Containers and, consequently, the huge Container boom has led to the German fleet's value rising by USD 34 bn since the beginning of the year.
Their investments in the Small Dry sector are also being rewarded. The total fleet value has increased by USD 1 bn since January as rates have increased through the year.

South Korea
South Korea moved up to 7th place since January this year, overtaking the UK. Their total fleet value now stands at USD 58 bn, an increase of 24 bn since the beginning of the year.

South Korea's investments in the LNG and LPG sectors are finally paying off with values doubling since the beginning of the year. With LNG prices peaking in the second half of 2021, the fleet values have doubled for South Korea's gas sector. Hyundai LNG, Pan Ocean and H Line have ordered 15 Large LNG carriers this year, with the most recent order at USD 200 mil, an increase of USD 20 mil on newbuild values.
South Korea still maintains a dominant position as a global seaborne car exporter. Leading shipowners/operators are Glovis, who have expanded the PCTC fleet in recent years, and Eukor, with 20% of shares owned by Hyundai Glovis and Kia Motors. The high volume of car manufacturing and seaborne exports makes South Korea the third largest owner of Vehicle Carriers.

UK
The UK fell to 8th place owning a total of USD 54 bn in assets. Their total fleet value has increased by USD 15 bn since the beginning of the year with most gains seen in the booming Bulker and Container sectors.
The Containership market has been under immense pressure over the last year; COVID-19 related pent up demand pushing consumer spending, bad weather in China and COVID-19 related terminal lockdowns contributing to high port congestion. However, we are now seeing global supply chain issues and port congestions threatening Christmas deliveries in parts of the UK. Felixstowe, one of the UK's major Container ports, report congestion building as a severe shortage of truck drivers means Containers are piling up in port storage yards. This is making it increasingly difficult to unload Containers and re-load empty Containers to be sent back to Asia. This could cause rates to increase even more across the sector and increase values further.

Taiwan, China
Taiwan, China has made a new appearance in the top 10 rankings as their investments in Bulkers and Containers come to fruition. Their total fleet value is USD 47 bn, with USD 32 bn from their Container fleet alone. Companies like TS Lines, Wan Hai Lines and Evergreen have placed a total of 107 orders so far this year, 1/5th of the total orders placed.

Norway
Norway has fallen one more place to 10th since January this year, driven mostly by the decrease in value of the Offshore fleet. A lot of Norway's investments are in the MODU sector, so as oil majors aggressively cut CAPEX, MODU contracts are terminated, suspended, or delayed. Offshore values across all ages and types were affected. Major MODU owners such as Borr Drilling have had their fleet lose half a billion in value.

VesselsValue data as of November 2021