India Covid crisis: no impact on seaborne trade yet, but disruptions likely

2021-04-30 09:21By： xinde marine news
The resurgence of Covid-19 in India has prompted fresh lockdowns across a number of states. While ports, steelmaking plants and refineries are deemed essential businesses and continue to operate, disruptions should be expected in the following weeks and possibly months.

Steelmakers are diverting mass oxygen supplies for medical use. So far the impact on steel output is said to be minimal. However, major car manufacturers are shutting down their plants or bring forward maintenance, the first signals of faltering domestic demand. As a result, steel mills are likely to focus on overseas markets similar to 2Q20 when exports jumped by 1.7 million tonnes or 216% after the imposition of the first lockdown. Record-high steel product export prices further incentivise shipments. 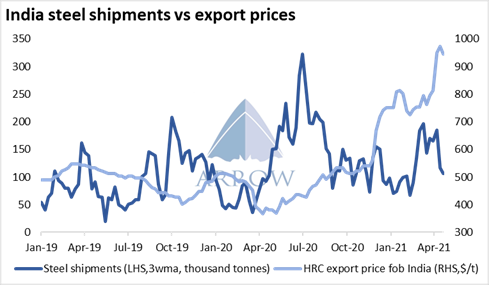 Coal shipments to India have not been affected yet and hover around pre-pandemic levels. Last year, imports were slashed soon after the outbreak. This time around the impact should be less acute as India's thermal coal stocks are equivalent to just 12 days of consumption, the lowest seasonal level since 2018. That compares to 25 days when the first lockdown was announced in March 2020.  With the monsoon season around the corner the window for replenishing inventories narrows. As such, coal import demand shouldn't be affected materially. 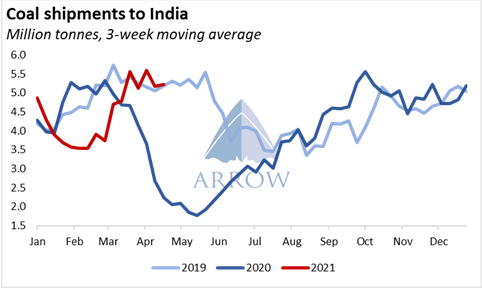 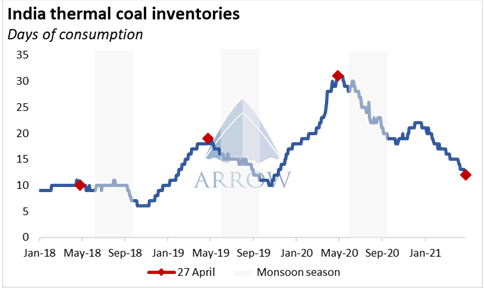 Stricter mobility restrictions have already curbed demand for transportation fuels. According to local refiners, demand for diesel and gasoline could drop by as much as 20% in April from the previous month and even further in May. While domestic demand dwindles, refined product exports are likely to swell mirroring the 15% year-on-year growth posted last April-May. Given the ongoing maintenance at Far Eastern facilities, Indian refiners could step up exports particularly to South East Asian and Australian customers, with most of the incremental volumes being captured by LR2s & LR1s. 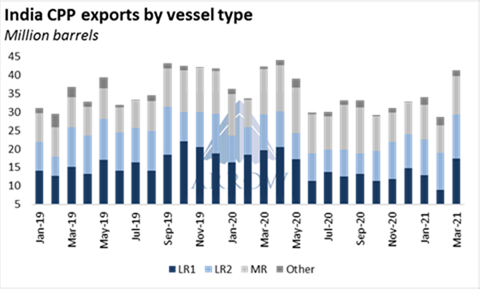 Currently India refinery utilisation remains high bolstered by the deferral of turnarounds to later dates due to the labour-intensive nature of the process. While downward adjustments are expected in May, strong CPP export demand should support run rates. Crude oil arrivals held steady throughout April, though reduced compared to Q1 levels. The drop is a result of high oil prices earlier in the year. Any dip due to weaker crude consumption will be reflected on June/July data. 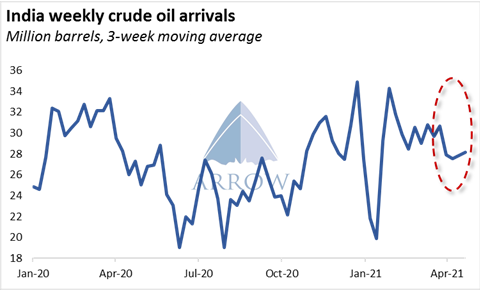 Although the most recent Covid outbreak has had a limited impact on India's seaborne trade so far, disruptions are likely in the near term. They should be less severe than last year, especially if a nationwide lockdown is avoided. That said, the scale of disruptions will ultimately depend on the effectiveness of restrictions and the speed of vaccine deployment.