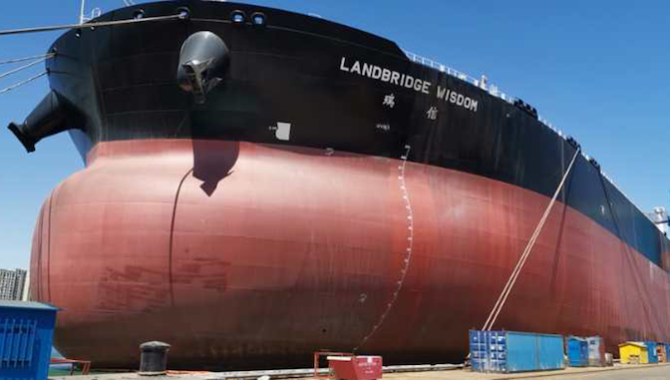 Hong Kong-based Landbridge VLCC International, a subsidiary of China's Landbridge Group has entered into a sale and leaseback agreement with John Frederiksen's SFL Corp for a very large crude carrier newbuilding (MV Landbridge Wisdom).
SFL Corp said it had agreed to acquire the 308,000 dwt VLCC for a net purchase price of US$65m following delivery of the vessel from Dalian Shipyard in the second quarter. The vessel comes in combination with a seven-year bareboat charter which will add nearly US$60m to the company's fixed rate charter backlog.
Under the terms of the deal the Chinese owner has options to buy back the vessel after three years. At the end of the term it becomes obligated to re-acquire the ship.
Meanwhile, Landbridge has secured a three-year sub charter with oil major, BP. The company has agreed on a rate of approximately US$35,000 per day with BP, giving the firm a spread of more than US$10,000 from what it will pay SFL.
Landbridge Wisdom is the last of six VLCCS ordered by the company at Dalian Shipbuilding Industry Co. Lenders involved in the purchase of the five previous ships include Chinese lessor CSIC Leasing, Norway's Sole Shipping and US investment firm Varde Partners.
Landbridge, is already an active oil trader, and operates five VLCCs. With the arrival of the latest vessel, the company has sealed its position as the largest privately owned tanker company in China. All the vessels are managed by Landbridge Ship Management.
When Landbridge gained its fourth ship, MV Landbridge Prosperity in May 2019, chief executive  Vincent Lai said:
“Our modern fleet of VLCCs are among the most fuel-efficient VLCCs on the water, and complement our port operations and activities in the oil and gas industry. The transaction is a part of our scrubber retrofitting programme for the whole fleet, which cements our pioneering position in response to the IMO 2020 convention.”
Source:hongkongmaritimehub