2020-03-26 15:59By： xinde marine news
China’s crude oil imports in the first two months of 2020 from top supplier Saudi Arabia rose 26% from a year earlier, while purchases from No. 2 supplier Russia gained 11%, Reuters’ calculations based on customs data showed on Wednesday.
China’s total crude oil imports during January and February rose 5.2% from the previous year to 10.47 million barrels per day (bpd), according to preliminary data earlier this month. Refiners typically build up crude stockpiles ahead of the Lunar New Year holidays, which fell in late January this year.
Orders for imports in January and February were made months before the coronavirus that first erupted in China’s Hubei province started to drag on Chinese oil demand and spread around the world. China is the world’s biggest oil importer.
Looking ahead, March arrivals have been assessed at about 10 million bpd, according to Refinitiv Oil Research, higher than the 9.26 million bpd China brought in a year earlier, as refiners bought up ample global supplies at much reduced prices despite being forced to lower plant operations as fuel demand was limited by the coronavirus outbreak.
Chinese customs did not give a break down for the imports in each month.
Imports from Saudi Arabia were 14.74 million tonnes, or 1.79 million bpd, according to data from the General Administration of Customs.
That is up from the 1.45 million bpd imported a year earlier and the average daily imports of 1.67 million bpd for all of 2019.
Russia supplied 14.055 million tonnes over the two months, or 1.71 million bpd, the data showed.
Following the collapse earlier this month of the supply deal by OPEC+ – a grouping of the Organization of the Petroleum Exporting Countries (OPEC) and other producers including Russia, Saudi Arabia and Russia have each vowed to open their taps in a war for market share that has caused a more than 40% drop in oil prices since the OPEC+ meeting on March 6.
China’s imports from the United States were zero, the data showed. U.S. imports, which fell last year because of the U.S.-China trade war, are likely to pick up later in 2020 after Beijing started granting tariff waivers on U.S. goods including crude oil from early March.
There were no shipments from Venezuela for a fourth month in a row, as China National Petroleum Corp (CNPC), Caracas’s top oil client, avoided lifting any oil from there to avoid violating secondary U.S. sanctions.
Under extended U.S. sanctions on Iran’s oil exports, China’s imports from the Middle East producer trickled to 666,546 tonnes during the January-February period, down 81% from a year earlier.
Shipments from Malaysia quadrupled during January and February to 3.58 million tonnes, or 436,000 bpd.
Below are details of imports from China’s key suppliers. Volumes are in million tonnes, with the percentage changes calculated by Reuters. 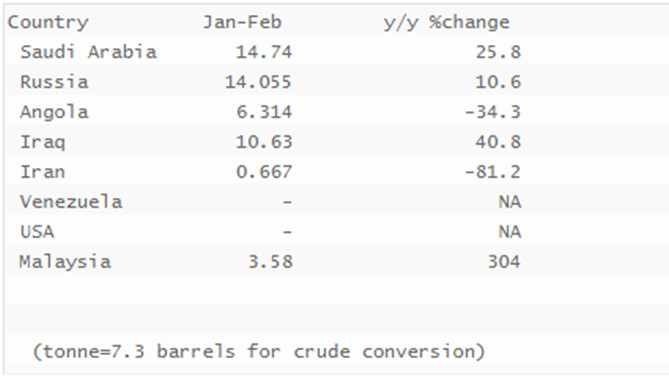