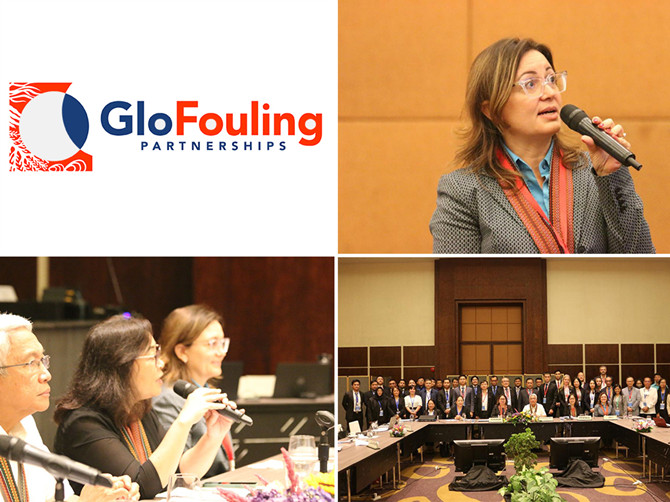 A Partnership for Environment Management in the Seas of East Asia (PEMSEA) Regional Task Force meeting is taking place (23-25 November) in the Philippines. The goal of the meeting is to advance towards the establishment of a regional strategy to manage biofouling in the East Asian Seas, to minimize the introduction of invasive aquatic species.
The strategy is one of PEMSEA's commitments to GEF-UNDP-IMO GloFouling Partnerships project as a Regional Organization. The GloFouling Partnerships project is a collaboration between IMO, the Global Environment Facility (GEF) and the United Nations Development Program (UNDP) to protect marine ecosystems from the negative effects of Invasive Aquatic Species (IAS) introduced via biofouling.
Prior to this event, two meetings were held virtually: a regional awareness seminar in June 2021 and the Regional Task Force's first meeting in April 2022, at which the Task Force was formerly established , and first discussions were held on the regional biofouling management strategy and action plan.
The PEMSEA scheme is part of the GloFouling Partnerships project's drive to work with as many countries as possible in the region via partner regional organisations. It also encourages a coordinated approach across the region in the management of biofouling.
Southeast Asia is the fourth region to see the establishment of a regional task force and the development of a regional strategy. The next area to benefit from such a program is due to be the Pacific region (in collaboration with SPREP) in 2023.
The project also collaborates with UNEP/IMO REMPEC to facilitate  the replication in the Mediterranean region of national activities conducted by Lead Partnering Countries under the project . And it has plans to engage with UNEP's Regional seas programme to reach out to western and central African countries.
In addition to PEMSEA country partners, those attending include the Philippines and Indonesia (both GloFouling Partnerships Lead Partnering Countries) plus, representing IMO, Lilia Khodjet El Khil and Ernesta Swanepoel, a consultant on international environmental law.
PEMSEA member states that have attended the Regional Task Force meeting are Cambodia, Indonesia, Lao People's Democratic Republic, the Philippines, the Republic of Korea, Singapore, Timor-Leste and Vietnam.
PEMSEA plans to present its regional biofouling strategy at the 15th EAS Partnership Council in July 2023, and to incorporate anti-biofouling activities into the Sustainable Development Strategy for the Seas of East Asia (SDS SEA) Implementation Plan 2023-2027.
IMO is expected to present the biofouling strategy at the Association of Southeast Asian Nations (ASEAN) Maritime Transport Working Group meeting in March 2024 (date to be confirmed).