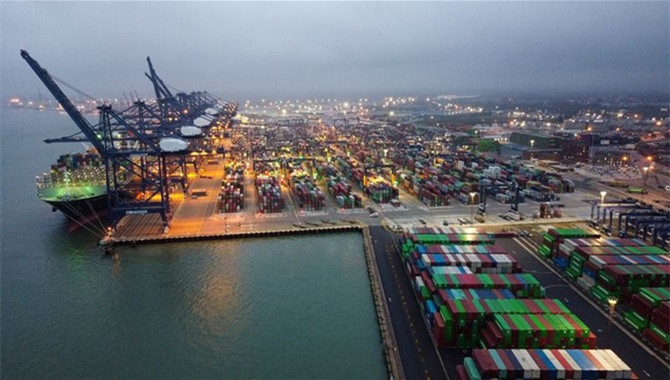 Site of the last attempted invasion of England, the coastal town of Felixstowe is about to absorb another shock from the sea. Only this time the problem will be with foreign ships that don't come ashore.
Starting Sunday, about 2,000 dockers at the Port of Felixstowe will go on strike for eight days, halting the flow of goods through the UK's largest gateway for containerized imports and exports.
Handling about a third of Britain's total container volume and an even bigger share of direct trade with Asia, the east coast settlement of about 25,000 people is the economic equivalent of the neighboring US ports of Los Angeles and Long Beach or the European Union's premier trade hub in Rotterdam.
Shipping lines plan to reroute cargo around the picket line, adding time and cost. A.P. Moller-Maersk A/S, the world's No. 2 container carrier, said last week that two ships will skip usual stops and unload Felixstowe-bound consignments at continental ports before sending them on when the strike ends. Another will switch to DP World Ltd.'s London Gateway, the UK's third-busiest port.
UK Container Gateways
Felixstowe controls about one-third of UK container imports and exports* 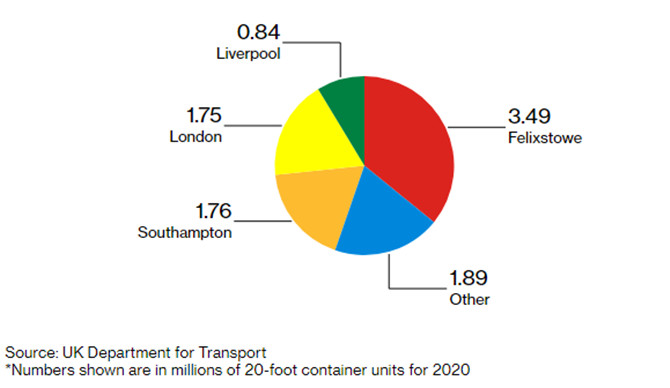 The strike could disrupt more than $800 million in trade, according to Russell Group, a data and analytics company. Though it's too soon to evaluate any wider hit to growth, companies are anticipating longer delivery times and higher expenses that can only hurt Britain's inflation-ravaged economy.
“It's probably going to be an expense that we end up paying in the same way there were lots of knock-on costs of the ship that got stuck in the Suez Canal,” said Gary Grant, founder of The Entertainer, a toy retailer with goods currently bound for Felixstowe. “It's just a risk of being in business. You just have to get on with it and try to sell more toys.”
Heading into the disruption, Felixstowe, owned by Hong Kong-based CK Hutchison, had begun to ease congestion that built as the Covid crisis roiled world trade, a trend reflected in reduced dwell times for containers, according to supply-chain visibility platform FourKites Inc.
A strike will likely reverse that progress, it said, citing similar labor actions in ports such as Melbourne and Montreal that boosted shipment durations from 15% to 50%.
Flowing Through Felixstowe
Container dwell times have improved all year at the UK's busiest port 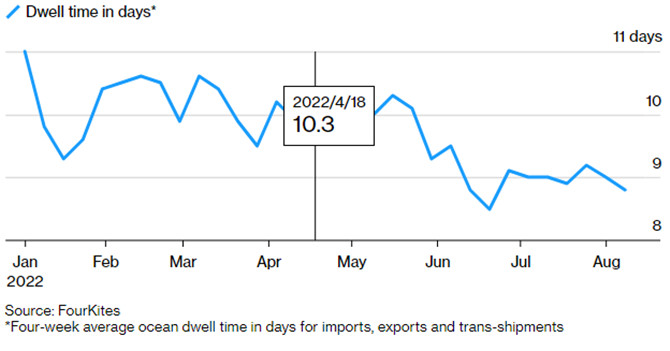 Flexport Inc., a digital freight platform, estimates that it could take 24 days to clear cargo backlogs from the strike. The ripple effects could worsen congestion far from the UK, it said, citing Felixstowe's 15 weekly services of container ships and truck-carrying ferries serving mainland Europe and Asia.
Among the biggest categories of imports through Felixstowe, located in the county of Suffolk some 70 miles from London, are furniture, computers and auto parts, according to OEC data. Another key import via the port is apparel, particularly from India, based on figures from San Francisco-based Flexport.
The port ran a trade deficit in May, with exports of £861 million ($1.02 billion) and imports totaling £3.84 billion, indicating its status as a linchpin in supplying UK retailers. Shortages of some goods could become an issue were the dispute to continue into the autumn, when shops begin stocking up for the holiday season. 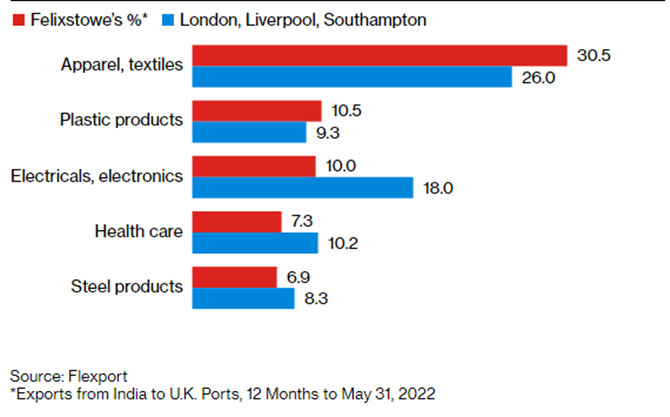 Dockworkers at the Port of Liverpool, an important hub for trans-Atlantic trade, have also authorized a strike as inflation erodes incomes while shipping lines reel in record profits.
Disruption to the UK economy goes far beyond the maritime sector, however, with national rail and London subway workers staging pay protests last week and postal staff at Royal Mail Plc due to begin a series of walkouts on Friday. Airport and airline employees are also locked in disputes, while even barristers and nurses have staged walkouts or are planning strike votes.
Londoners Working From Home Again as Tube Strike Hobbles City
While the effect of the Felixstowe action alone might be negligible for gross domestic product given that it's happening mid-quarter, with time for the bottlenecks to ease, “it may be that the overall impact of labor disruptions acts as a drag to GDP,” according to Flexport economist Chris Rogers.
China is the largest market for goods flowing into and out of Felixstowe, according to OEC data.
Trade With the World
China is the largest market for exports and imports through Felixstowe

With a recession already looming, industry group Logistics UK is urging all parties at the port to negotiate a settlement. It also says the nation's supply chain remains “resilient, and can find alternative routes when issues occur, to alleviate potential disruption.”
But that's not exactly what you hear from DP World, which operates the UK's No. 2 container port, Southampton, in addition to London Gateway. The Dubai-based company says it has little ability to handle additional cargo should shipping lines try to divert more vessels to its terminals.
“We shall of course do everything we can to support the UK supply chain, although it should be understood that we are currently delivering record volumes and there is minimal spare capacity,” it said by email last week. 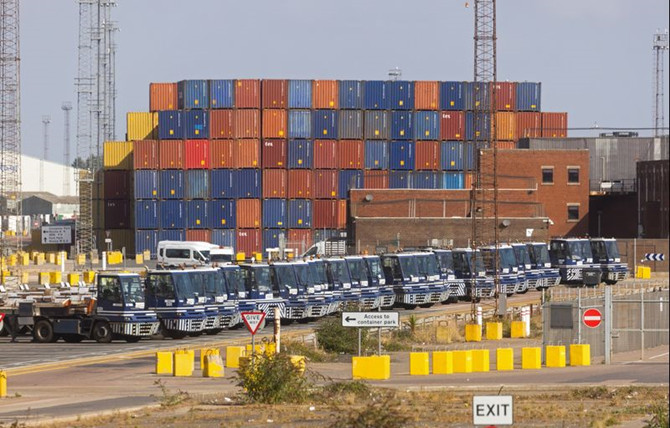 Idled tug vehicles on the dockside during the first day of a strike at the Port of Felixstowe.Photographer: Chris Ratcliffe/Bloomberg
'No Winners'
The Port of Felixstowe meanwhile said Friday that the Unite union had rejected a plea to call off the strike and resume negotiations after spurning a proposed 8% pay hike.
“The port regrets the impact this action will have on UK supply chains,” it said, adding that “there will be no winners” from the confrontation.
The failed invasion of Felixstowe during the Second Anglo-Dutch War of 1667 was repelled in less than a day in what became known as the Battle Of Landguard Fort.
A speedy resolution to the town's latest maritime confrontation is looking far less likely.