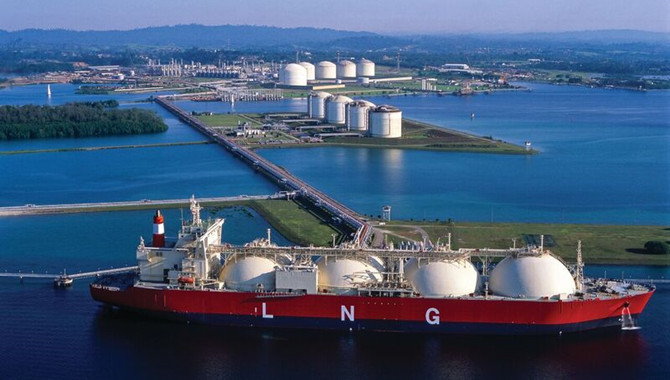 Sinopec plans to import 17.4 million mt of LNG in 2021 and produce 34 Bcm of natural gas, including about 12 Bcm of shale gas, in an effort to meet domestic demand, while lowering carbon emissions, senior officials said during the company's Q1 conference call April 29.
The Chinese state-owned oil and gas giant imported 5.2 million mt of LNG in the first-quarter, which was stable from the same year-ago period, with a slight import loss, deputy head of Sinopec's finance department, Song Zhenguo, said.
In comparison, China imported 67.07 million mt of LNG in 2020 and 15.25 million mt in Q1 last year, data from the General Administration of Customs showed.
In an effort to lower losses and boost profits, the company plans to adjust its procurement structure by optimizing the volumes taken via long-term and short-term contracts, as well as from the spot market, facilitated by hedge tools, deputy head of operation & management department, Li Li said.
As the second largest natural gas producer in China, Sinopec raised its output by 16.8% year on year to 8.26 Bcm in Q1 to contribute 15.5% to the country's domestic production during the quarter, according to its Q1 report and data from the National Bureau of Statistics.
Sinopec maintained its target of producing 34 Bcm of gas in 2021, Song said, as well as the targets for 2022 and 2023 at 38 Bcm and 40 Bcm, respectively. He added that all-in-cost for the domestically produced shale gas was below $1/cm, and will likely fall further as rising production will dilute the cost per unit of gas produced, as the facilities and technology are fixed.
The company targets to produce 12-12.5 Bcm of shale gas in 2021, from 10.6 Bcm in 2020, lifting its shale gas production by 6%-10% annually, according to vice president and secretary to the board of directors, Huang Wensheng.
EXPECTING POLICIES TO BOOST HYDROGEN DEMAND
Sinopec expects the Chinese government to announce policies to encourage the development and production of hydrogen cell fuel vehicles in the second half of this year, which will trigger demand for hydrogen in transportation and help to boost sales at Sinopec's hydrogen fuel cell outlets, Huang said.
He added that only two of Sinopec's hydrogen fuel cell outlets, in Guangdong province and Shanghai, among its ten operating stations, had breakeven. The rest were in the red due to a lack of demand with limited hydrogen fuel cell vehicles on the road.
“Under the current model, the cost of one [hydrogen] station will be around some [Yuan] 20 million [per year],” he added. Sinopec targets to become China's top hydrogen supplier based on its production capacity, infrastructure and transportation fuel retail outlet.
The company planned to build 100 hydrogen fueling stations in China this year, and raised the number to 1,000 during the 14th five-year plan over 2021-2025, Platts reported previously.
Huang said Sinopec has about 31,000 transportation fuel retail outlets at good locations in China, a 60% market share, which will help to grow its hydrogen market.
THROUGHPUT TO BE STABLE
Sinopec will keep its operating rate relatively stable, despite heavy maintenance in the coming months, Chen Yang, deputy head of board secretaries, said. The world's top refiner by capacity processed 63.52 million mt of crude in Q1, jumping 16.3% year on year due to a low base in 2020 and an expanded capacity with its new 10 million mt/year Zhongke Petrochemical.
The throughput can be translated to a utilization rate of 85.4% in Q1, taking into account its primary capacity of 296.9 million mt/year by the end of 2020. Chen said Sinopec will raise the throughput of refineries still in operation to make up for those undergoing maintenance, which will limit the impact on the company's overall throughput.
Sinopec shut 43 million mt/year of refining capacity in April for maintenance, followed by another 3.5 million mt/year in May, according to Platts data. The company targets to process 250 million mt of crude in 2021, up 5.5% from 236.91 million mt in 2020, Platts reported.
Meanwhile, Sinopec's gasoline output in Q1 stood at 16.37 million mt, exceeding its gasoil production of 14.34 million mt, which suggests that the company is continuously trying to meet the recovery in urban transportation fuel demand for better profit. 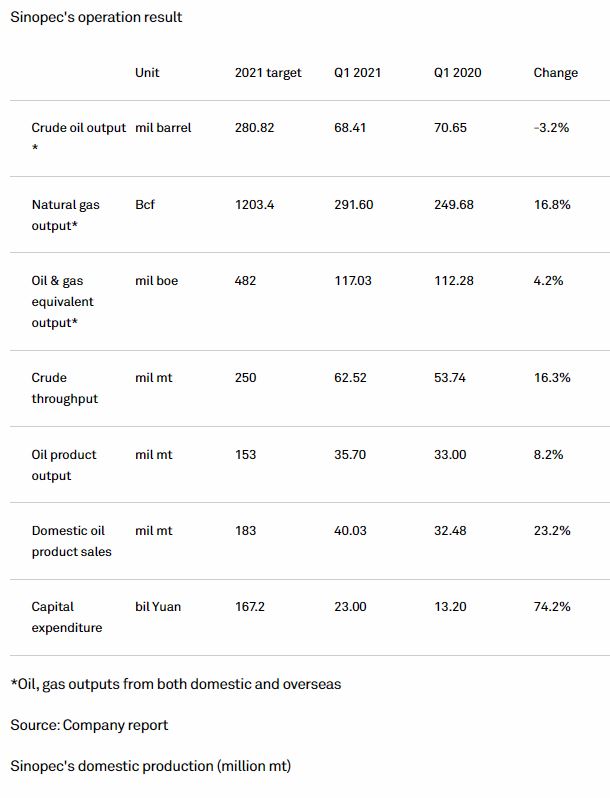 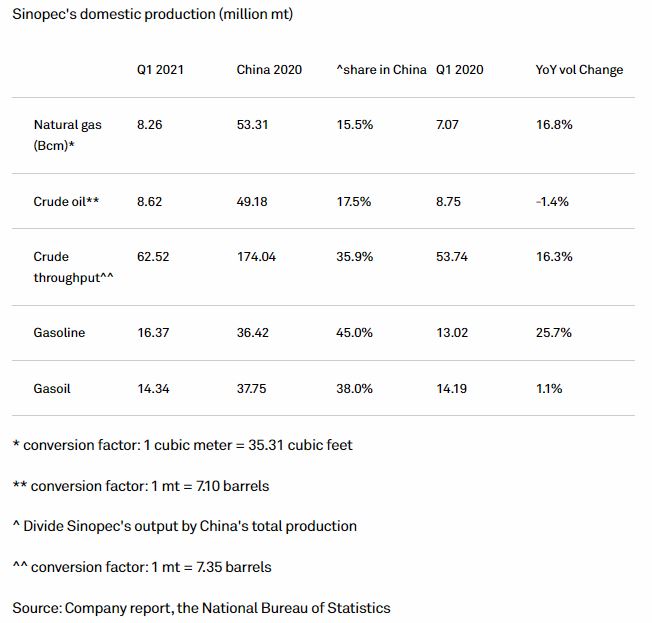 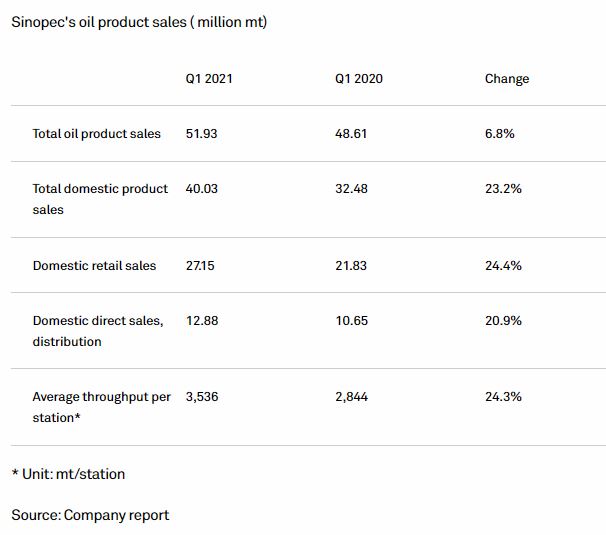 The first time Sinopec produced more gasoline than gasoil was in Q4 2020 — 15.45 million mt versus 15.35 million mt, respectively.
The company's total oil product sales rose 6.8% year on year to 51.93 million mt in Q1, but remained below the 62.37 million mt reported in Q1 2019 due to the decline in both domestic and overseas sales amid the COVID-19 pandemic.
Sinopec lifted its capital expenditure by 74.2% year on year to Yuan 23 billion ($3.55 billion) in Q1, with Yuan 7.6 billion allocated to the refining sector for the upgrading of Anqing Petrochemical and the expansion of Zhenhai Petrochemical. It allocated only Yuan 2.4 billion to the refining sector in Q1 last year.
Source:Platts