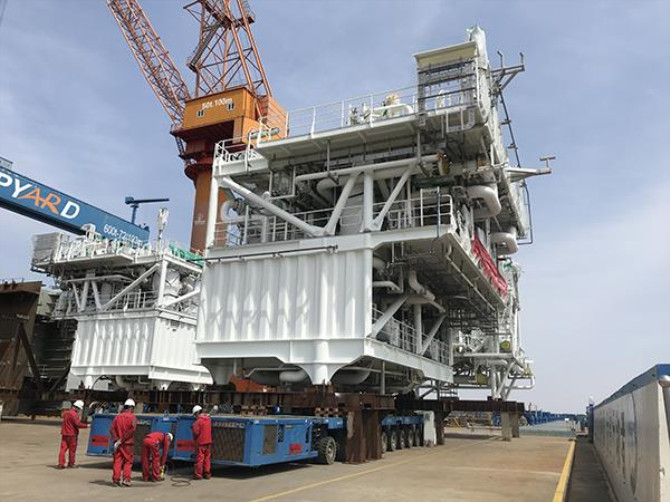 The Finnish technology group Wärtsilä has recently managed and completed the delivery of regasification modules for China's first newbuild LNG FSRU.
The vessel, the Transgas Power, was built at the Hudong-Zhonghua shipyard in Shanghai for Greek operator Dynagas.
Delivery of the three large-scale modules was completed on March 28 and the FSRU was launched two days later.
Wärtsilä designed the modules and sourced the required equipment, including valves and instruments.
The contract to fabricate the units was awarded to the Cosco shipyard in Qidong, China in September 2018.
The three regasification modules weigh 450, 80, and 240 tonnes.
In addition, Wärtsilä also supplied related regasification equipment comprising pumps, heat exchangers, valves, and instrumentation for installation in the engine room.
A second FSRU being built at the same yard for Dynagas, also featuring Wärtsilä regasification modules, is scheduled for delivery in mid-July 2020.
The regasification system supplied is based on the use of seawater and steam as energy sources, and water/glycol as the energy carrier in a combined loop. The plant consists of three trains, each with a capacity of 250 million standard cubic feet per day (mmscfd) or approximately 500 cubic meters per hour, and a common suction drum.
Source:LNG World News