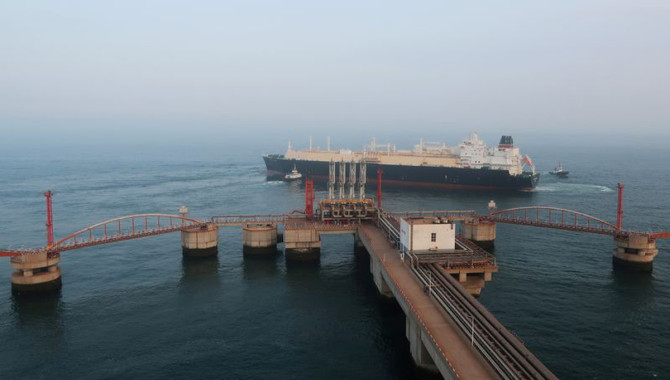 Record low prices for liquefied natural gas (LNG) are roiling the global gas market, creating havoc as traders rush to find alternative locations for cargoes with Chinese buyers rejecting shipments amid the coronavirus epidemic.
Asian spot prices for LNG LNG-AS have already tumbled to troughs of $3 per million British thermal units (mmBtu) - less than half of what they were at the same time last year.
At least one cargo bound for India has already traded below $3/mmBtu, down 30 cents within a week, traders said.
Concerns that Chinese companies could back out of contracts because of the impact of the coronavirus outbreak have slowed oil and gas sales into China. Reuters reported on February 6 that China's top LNG buyer China National Offshore Oil Corporation (CNOOC) declared force majeure on some prompt LNG deliveries with several suppliers.
Energy ship broker and consultancy firm Poten & Partners said on February 7 at least five LNG cargoes had been diverted from China, and another 30 due to land there this month could face diversions, delays or force majeure declarations.
"Prices are free-falling just within this week," a Singapore-based LNG trader told Reuters. "This kind of force majeure situation is unprecedented and has never happened before so it's big news."
In one example of the turmoil in the market, an executive from French oil major Total (TOTF.PA) said it had rejected a force majeure notice from an LNG buyer in China, without identifying the company.
At least one cargo bound for China, the world's second-largest LNG importer, has diverted and is heading towards Singapore storage tanks, several sources told Reuters. Three other vessels bound for China have reduced speed, one of them said.
At least two major suppliers to CNOOC told Reuters that the firm had requested that its cargo deliveries be delayed. A CNOOC executive declined to comment.
Consultancy Rystad Energy on February 7 cut its forecast for Chinese LNG demand growth this year to 4.7%, from a year on year gain of between 10% and 13%.
Where can cargoes go?
Traders are now casting around for homes for unwanted cargoes. India, which recently commissioned an LNG terminal, has some scope for more purchases, but is restrained by inadequate pipeline infrastructure, industry sources said.
Europe, which also has strong seasonal winter gas demand, is also struggling to accommodate more, they said.
"Europe absorbed most of the incremental LNG supply in 2019," said James Taverner, director at research and consultancy firm IHS Markit.
"However, with gas storage at high levels, limited opportunity for further power sector fuel switching, and uncertainty around how pipeline suppliers will respond, Europe may struggle to accommodate the surplus in 2020."
Major buyers in Japan and South Korea such as KOGAS and JERA could benefit as they are able to tap demand from utility companies, but overall consumption levels there are also limited due to mild weather, sources said.
"Low spot prices will certainly challenge the economics of many export projects," Taverner said. "Some LNG suppliers may even need to reduce their exports if they become uneconomic, but there are contractual, logistical, and portfolio considerations that may limit any turning down (of cargoes)."
Source:sxcoal